Principal Dr. Devidas Golhar in his welcome address acknowledged the importance of women and her contribution in every field.

Ms. Amrapali Chavan is a German Bakery Bomb Blast survivor. She shared her experiences which were motivating and inspiring for everyone present in the hall.

Ms. Deepali Awkale conducted a mind-blowing session on ‘Peaceful and Healthy Life” through activities wherein she engaged the staff members.

Asst. Prof. Teja Dighe co-ordinated and compeered the programme and Asst. Prof. Dr. Shilpa Kabra proposed the vote of thanks. 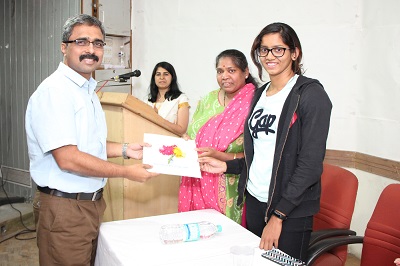 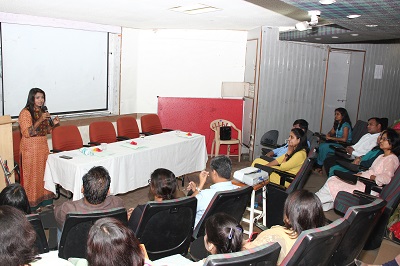 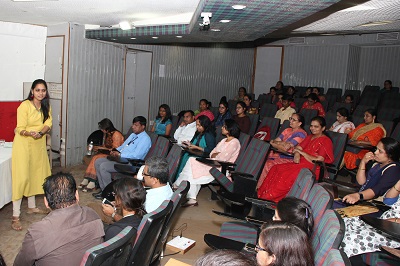 To make perfect social life balance, equal rights should exist between men and women. The overall objective of gender equality is a society in which women and men enjoy the same opportunities, rights and obligations in all spheres of life. In order to promote gender equality, guaranteed by Article 15 of the Indian Constitution, we need to change the mode of interaction at all levels-home, school, college, university, workplace and so on. To increase the outreach for creating an environment that fosters equal treatment. Government of India envisages engagement of Gender Champions in all educational institutions across the country.

Under this instruction our college Marathwada Mitra Mandal College of Commerce organized Poster competition on “Gender Equality’. Students from all FY BBA, BBA(CA),BSC(CS),BCOM were participated in it. This event explored the thought process of students regarding the theme. First and second prize were given to two groups. The result were judged by two faculties, Dr. Joe Lopez(HOD,BBA) and Mrs. Nidhi Satavalekar (Co-ordinator BBA(CA)).

As per the instructions from university, two students namely Varsha Darekar and Shradha Bhosale , are selected as Gender Champion. Certificates were given to participants and winners from poster competition. Dr. Anapt Sandip (HOD (BBA(CA)) , Dr Joe Lopez(HOD(BBA)) and all the faculty members were present for the program. 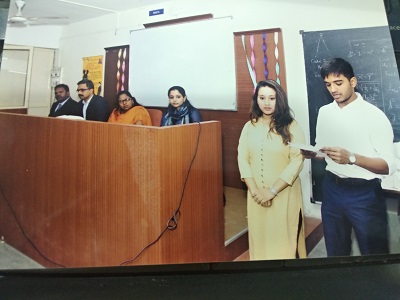 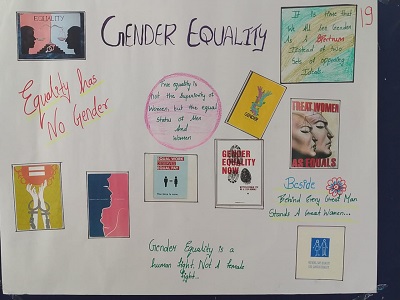 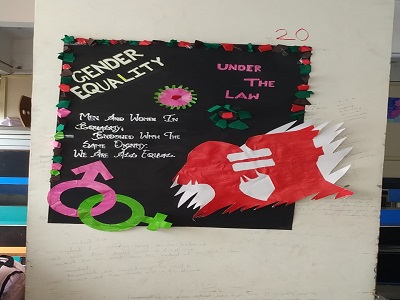 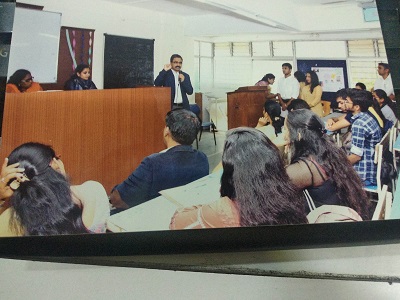 Entrepreneurship Development and Start Up

Guest lecture on "Entrepreneurship Development and Start Up" was organised on 17th Feb’2020, for third year students of B. Sc. (CS) and BBA (CA) . Resource persons were Mr. Aditya Bavadekar Vice President (Dept of Business Administrator),MITCON,, Mr.Ganesh Khamgal, Speaker,Chief Manager MITCON. Mr.Ganesh Khamgal motivated students to develop entrepreneur’s skills and added if you have an entrepreneur’s mindset or willing to do hard work then success is very near.Positive feedback was received from the students. Around 90 students from third year B. Sc. (CS) and BBA (CA) attended the lecture. Certificates of participation and attendance were distributed to the students. 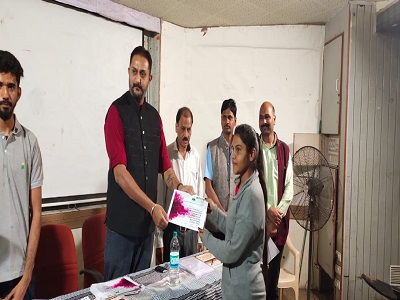 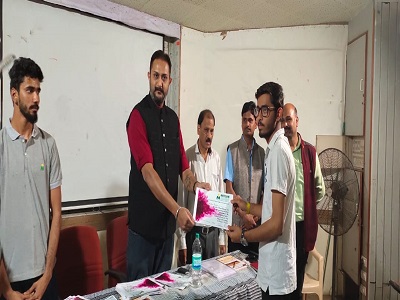 A guest lecture on “Effective Team Building” was organized on 4th Feb., 2020 for M.Com. students. The lecture included team building games which helped the students to understand the importance of working in a team. The guest speaker was Ms. Jahanara Pathan. In all 69 students attended the lecture. 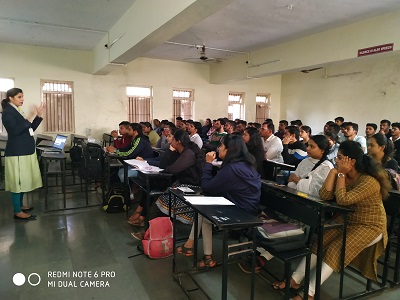 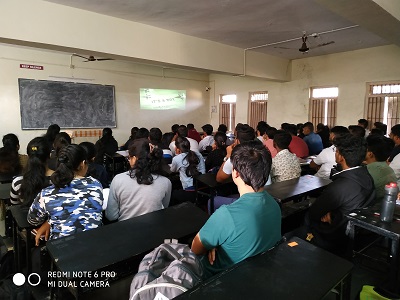 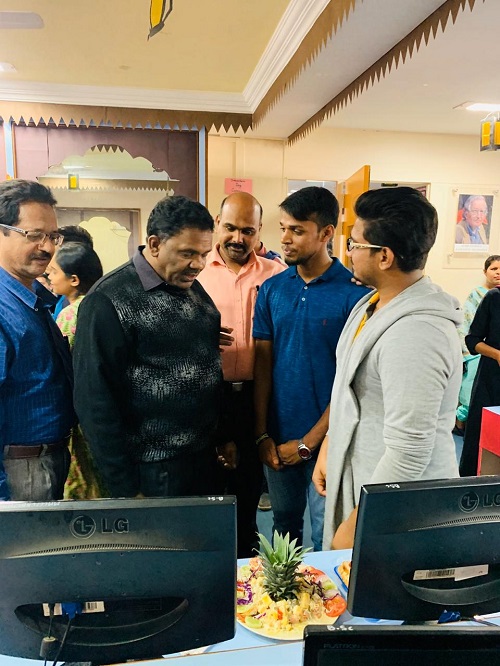 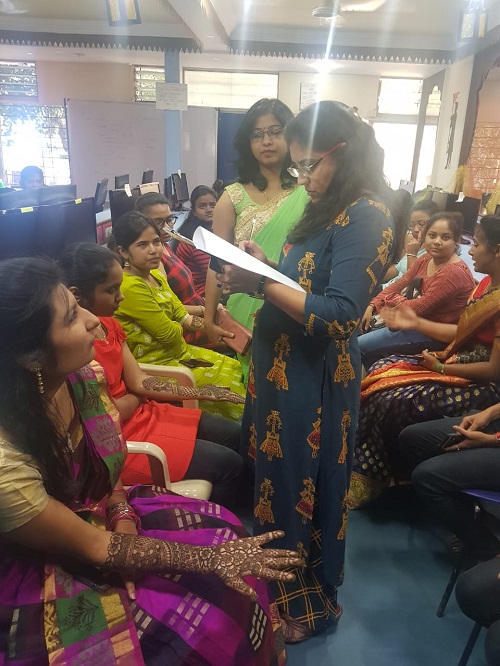 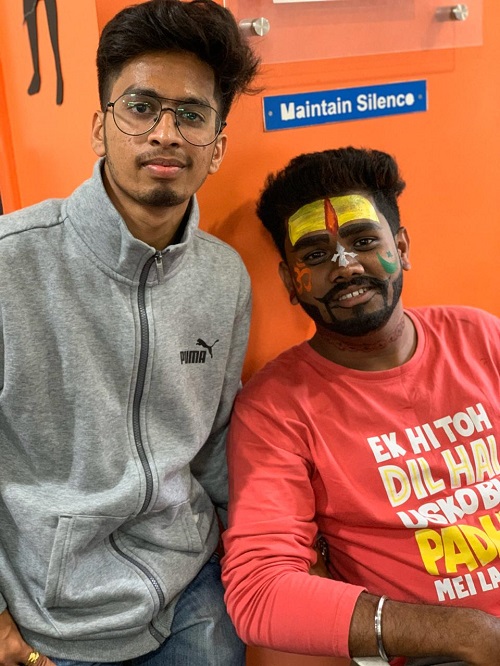 On 8th January 2020 our department celebrated variety of joyous events:

We started our day with Flameless Cooking. Students on major strength participated in it. Variety of snacks like sandwiches, Shevpav, Bhel, Burgers, cocktails and many more such dishes were prepared by students. A tasty, foodie environment was created with this flameless cooking.

This program ended with starting of another event ‘Paper Plate Decoration’.

After decorating the plates, our students started the next event: Face/Tattoo /Painting and Hairstyle. With organic colors , students beautifully decorated face of their partner. Only two participants were allowed for this event. Girl participants also presented their art of hairstyle by styling hairs in creative manner. This colorful event was followed with another artistic program ’Mehandi’.

Although this is a traditional art of girls, boys also participated in this event and made this event more joyful.

Senior college had organized a Consumer Day on 4th January, 2020, students had put up stalls of eatables, games and commercial merchandise to gain an experience of commerce in practices and action. Students altogether had a different practical learning experience. In all 75 students participated by putting up stalls. The program was inaugurated by Principal Prof. S.M.Edke. the judge for the event were Prof. Meenal Kabra(BCA), Dr. Deepal Awati (MMSID) and Prof. Nafis Shaikh (MMSID). The program was coordinated by Dr. Shilpa Kabra (Cultural head- Commerce) and Dr. Mukti Bapna under the guidance of Dr. S.S. Pokharna (HOD-Commerce). 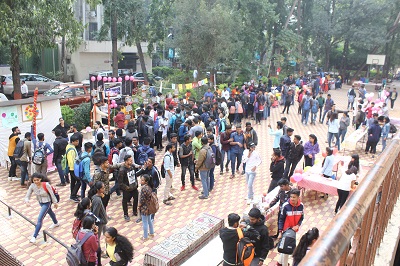 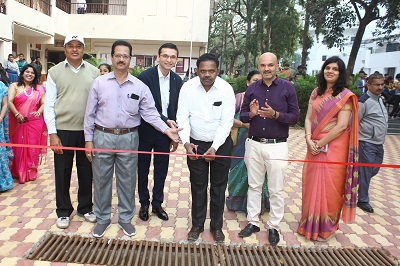 FDP on Cyber Crime and Law 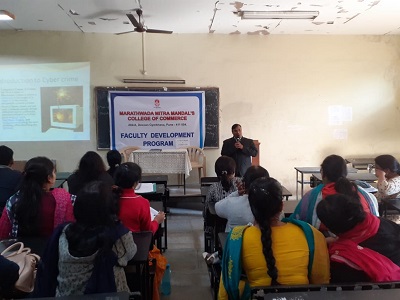 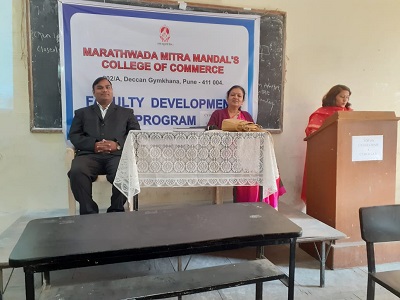 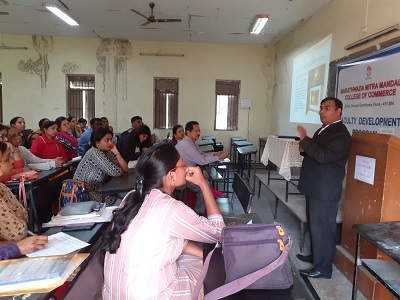 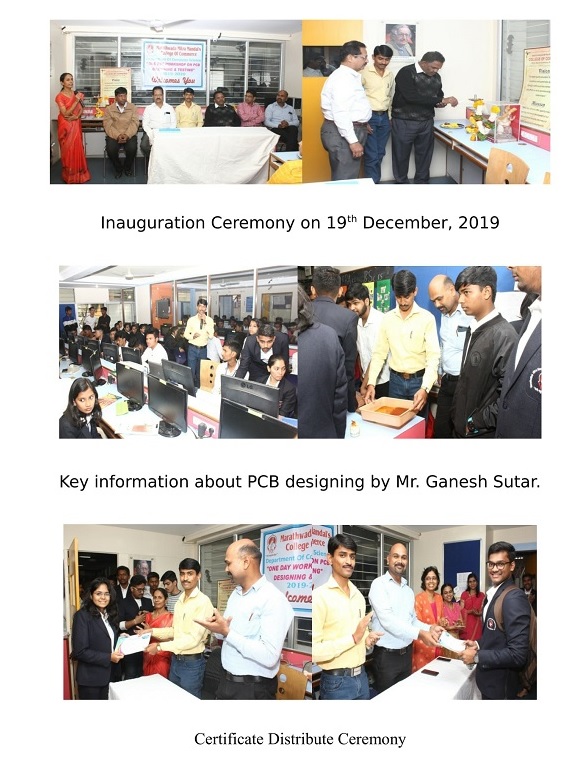 One Day Workshop on “PCB Designing and Testing”
Organized by Department of Computer Science.

The Department B.SC.(Computer Science) arranges the various kinds of
Workshops on continuous basis to enhance student’s practical & technical skill and to make them compatible with industry. To fulfil departmental goal and industry need computer science (in Electronics) & department has organized “A one day workshop on "PCB designing and Testing" Presented by Ganesh Sutar.Technical Engineer, A square Industrial Solutions Pvt. Ltd. in which knowledge of “How the PCB Designing is done in industry?” was given to the our college Students on 19th December, 2019.

PCB Designing is one of most emerging field in Electronics in today’s era. For the students of Computer Science (Electronics) this is a good field to start their career.PCB designers are key persons in research and development (R&D), electronics production units as well as in the PCB industry. Event was started by the informative and motivational talk to have a healthy “PCB Designing and Testing Workshop”. The workshop started with an inaugural function at 10:00 A.M. on 19th December, 2019.Dr. Rajeshwari Biradar Welcomed to the guest and addressed the workshop. 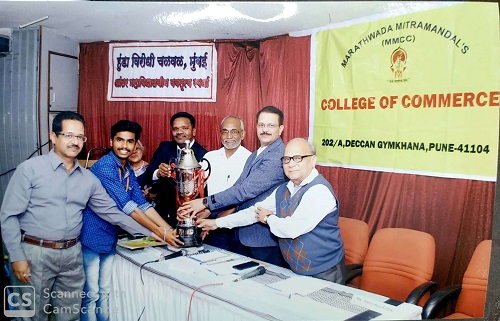 The Subjects for the competition were as follows:

4)With the existing Law it is possible to eradicate DOWRY successfully ?

Hon. Prasad Kulkarni , President, Pune Union of Working Journalist, Patrakar Bhavan, Pune was the chief guest for the inaugural function. According to him all students of today should strongly oppose dowry and each student who has performed today is a winner in his eyes.

Judges for the competition were Prof. Vaijayanti Chiplonkar and Mrs. Smita Warpe.

The prize distribution was done by the hands of chief guest Hon. Shri Ashok Morale, Additional Commissioner of Police Crime, Pune City who said that DOWRY being a social issue should be eradicated from the society and Guest of Honour Shri Ashish Bhatnagar , Deputy Director General, All India Radio, Pune who emphasized on direct action and encouraged the youth to break the boundaries .

A guest lecture on “Career Opportunities in Commerce field” was organized on 18th December 2019 at 9:00 am. for creating awareness of career in commerce field among the students of B.Com. and M.COm. The guest speakers for the programme was C.A.C.S Mr. Harish Mathriya and CS Vikas Vohra.

The speakers explained the scope and importance of commerce and the various career opportunities available in commerce field, which help the students in taking right decision at the right time. 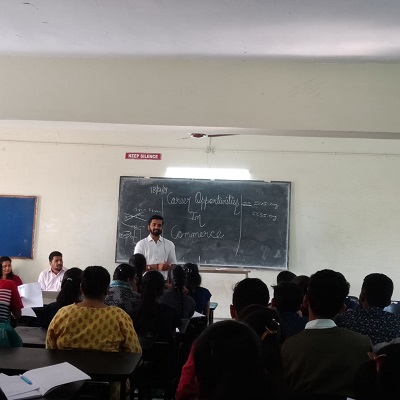 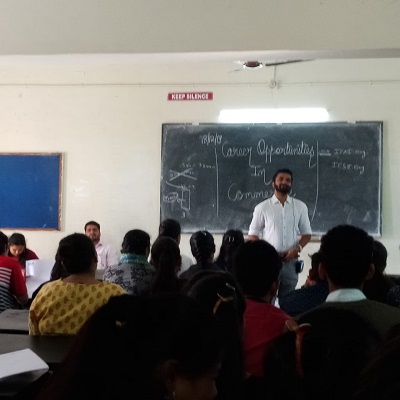 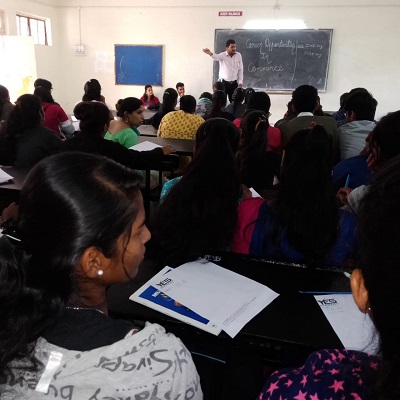 A guest lecture on NET/SET exam was organized on 12th December 2019 at 9:30 am. in Dnyaneshwar Hall for providing guidance on how to prepare for NET/SET exam. The lecture was arranged for the faculty members as well as students of M.Com. The speaker for the programme was C.A. Chandan Singh, an eminent resource person in his field.

The speaker shared her valuable views with the help of a PowerPoint Presentation showing the criteria of passing net/set exam along with the syllabus of Paper-I and Paper-II. 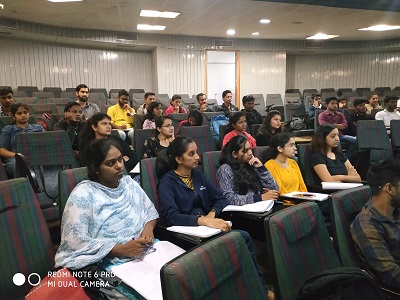 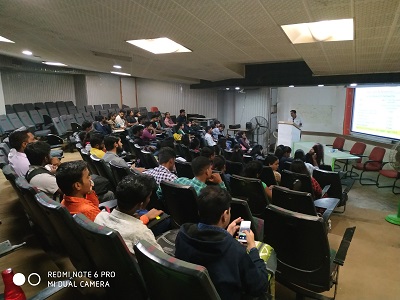 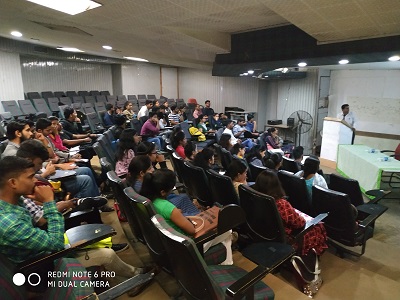 “World Ozone Day is observed on 16th September since 1994 and was established by the United Nations General Assembly. The day is mainly intended to spread awareness of the depletion of the Ozone Layer and search for solutions to preserve it.“

Keeping the above thought and spreading the message, Second Year BBA(CA) and BSc(CS) participated in competitions like poster presentation / model making and best slogan on 16th September 2019 at 10:30 am in Computer Laboratory.

The student gave the message of saving our Mother Earth and providing a Greener Environment to our future generations. It was a great opportunity to watch these young minds trying to create their ideas of a better environment on paper. 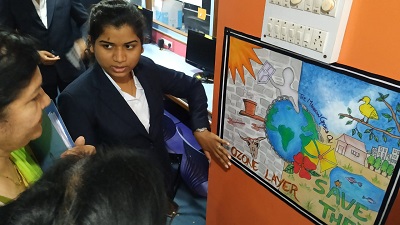 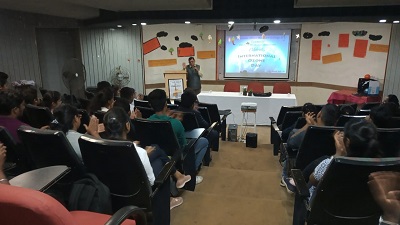 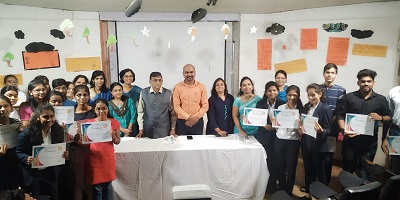