A programme on World Population Day and Guru Pournima was organised in the Assembly Hall of MMCC college on 16th July at 9.am.The speaker for the programme was Dr.AnjaliRadkar a faculty member fromGokhaleInstitute.TheIncharge for this programme were Dr.ShilpaKabra and Prof.AmolChoudhari.

The inauguration of the programme was done with SaraswatiPujan by lighting the lamp followed by Ganesh Vandana sung by NehaPadhye a student of S.Y.B.Com. Dr.SunitaPokharna Ma’am felicitated the guest.The speaker introduced her topic on World Population Day by presenting a PPT (Power Point Presentation) by explaining the various facts about population and how is it increasing at an alarming rate and measures to control it.Later,few students gave speeches and recited poems on Guru Purnima to share their respect for the Gurus.

The programme ended with vote of thanks and all

the staff members were felicitated by the students with a saplings along with the message given by students “Adopt A Child,Adopt A Tree”. 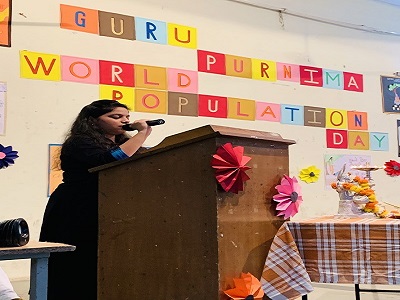 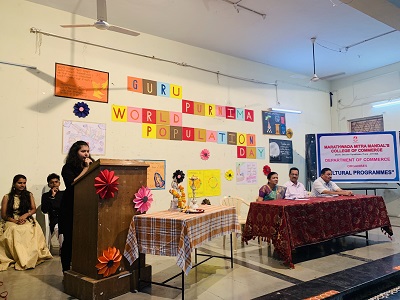